We were just on Mackinac Island for one day, but it was Memorial Day weekend, and it was packed!  We know better than to travel during peak times, but yet here we were in the midst of the mayhem.  Josh and I had visited this tiny, quaint, beautiful island before just the two of us, and it was peaceful and calm.  This time, however, with all 4 kids with us, we wondered whether or not bike rentals would still be available.  Mackinac Island, Michigan is unique in that there are no automobiles there.

To our surprise after a very long wait for breakfast at the Pancake House, there were still bikes available.  So we set off on the 8.2 mile circle around the island, and it was perfect.  There was a fog off the lake but clear at the shore … so beautiful.  The kids were doing great, and Josh and I were even getting pretty good at the tandem bike with our toddler riding along in the back.  (Side note … you may be tempted at some point to ride a tandem bike with someone special, thinking, “Oh, that looks so cute and fun!”  Nope.  Get your own bike.  It’s only cute for a minute). 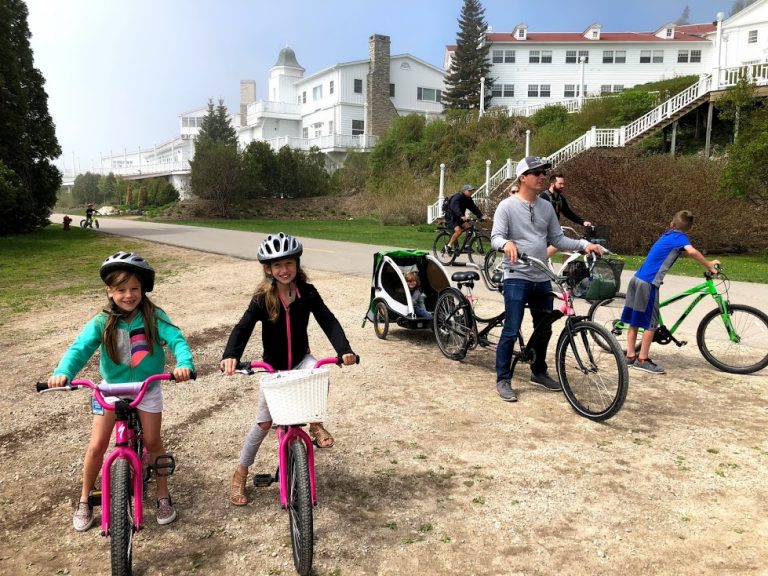 I had wondered how the kids would handle this experience, with all the people around and so many on bikes, but they were loving it.  We had done pretty well staying in our little formation, stopping off at a few different look-out spots along the way.  We had gotten almost all the way around the island when one of our kids had a small wreck.  Nothing too bad … just a quick stop to check for scratches.  I remember us talking about how it was almost time to turn our bikes back in, and then we were ready to take off again. 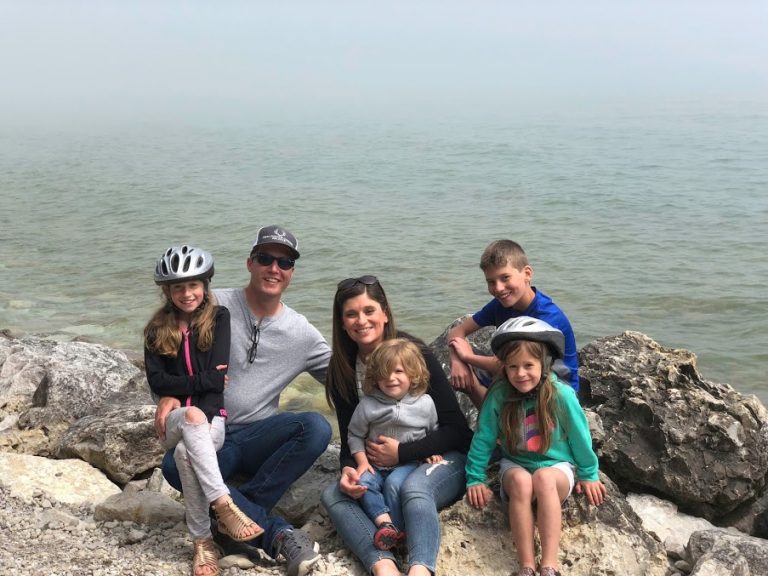 Up to this point the kids had been staying in front of us, but at this particular spot (super crowded spot), as we were getting going again, one of our daughters was pulling out right behind us.  As soon as we got the tandem going I looked back to check on her, but she wasn’t there.  I thought she must have just gone around us right away without me noticing, but I also didn’t see her up in front.  I yelled to our son to see if she was ahead of him … “No, she’s not up here,” he yelled back.  He went a little further ahead to make sure.  There were people everywhere.  Still no.  We stopped, looking in both directions for her and yelling her name.  Nothing.  My heart started to race.

We went back to the spot where we had stopped shortly before thinking maybe she was still there … no.  Josh got off the tandem and took our son’s small mountain bike to look for her in the other direction while I stayed there with the other kids.  I felt sure he’d come back with her.  A few minutes later I see him flying back … alone.  I couldn’t breathe.  I started to panic.  There were so many people.  She had been right there with us! How did she just disappear?

My mind immediately flashed to a sign we had seen hanging in the little airport in the middle of the island about human trafficking and a phone number to call to report suspicious activity.  I thought – someone took her.  Someone grabbed my beautiful young innocent daughter, and she’s gone.

There was a playground nearby, and a couple moms there who noticed I was freaking out came to see if they could help.  One sent their husband and one sent their teenage daughter to go looking after we gave them a description of our daughter and told them her name.  There was no sign of her anywhere.  Josh called the police and got an officer to come help us.  We were afraid that if someone did take her they could get her on the ferry, off the island, and we’d never find her.  (Remember, no automobiles here … the only way on or off the island is that small airstrip for general aviation planes and the ferry.)

I’m listening to the officer telling me not to worry and that he’s never lost a child on this island.  I’m listening to the moms tell me how safe this island is.  But all I can think of is the worst case scenario.  What if this time everything is not okay?  This is my baby!  I can’t just assume everything is okay when she is not here beside me and when I know of the horrible evil that exists in our world.

I just kept pacing and praying while people looked for her.  The police told us to stay put while they looked for her; but Josh, as I think any dad would be, was not about to stay there doing nothing, so he went looking too.  I kept praying out loud, over and over, not caring who was around or could see or hear me …  Jesus, keep her safe.  Jesus, wrap your arms around her.  Jesus, help her not to be afraid.  Jesus, bring her back to me.  Jesus, bring her back to me.

I would look at the time and feel the panic rushing, not feeling like I could breathe … but then I would feel the Lord’s presence.  It is hard to describe that part.  I was more scared than I had ever been in my entire life, but I also felt God by my side pumping me with strength and faith.

Too much time had gone by now though with Josh, 3 officers, another dad, and a teenager all looking for her.  It is only an 8 mile circle – someone should have seen her by now.  I just want to scream her name, but I know that I can’t scream loud enough for the whole island to hear me.  Josh comes back again … alone again … I’ll never forget the fear in his eyes and in his voice – “Have we lost our daughter?”

She’s been gone for an hour now.  I’m done staying still … my turn to go look.  I start riding on our son’s mountain bike, screaming her name.

After not too far, my phone rings …

Tears.  A sob in my heart and throat, and then finally a deep breath for the first time.

The officer who found her said he could hardly catch up with her.  She had ridden all the way back around the 8 miles we had already come.  When we had pulled out that last time she knew we were ready to take our bikes back, so she thought we had to go back the other way, not realizing we were making a big circle and not noticing that we turned the same way we had been going.

At first she didn’t want to talk about it at all – didn’t want anyone else to talk about it or make a big deal about it.  In fact, years later it is still something she’s sensitive about, which is why I have not mentioned her name.  At first she said – no, she wasn’t scared.  But when I finally got her alone to talk about it, those big beautiful eyes filled up.  She said that the whole time she wasn’t sure if she had gone too far ahead of us or if she had gotten too far behind us.  So she would stop every once in a while waiting for us, but then when she didn’t see us she would ride again as fast as she could.

We finished out our day on the island hugging and holding on to each other, and it was good. But Josh and I both had a hard time shaking it.  The what if still haunted us.  We were emotionally and physically drained.  But we also knew how blessed we were.  That day and ever since, we’ve held them each a little tighter. 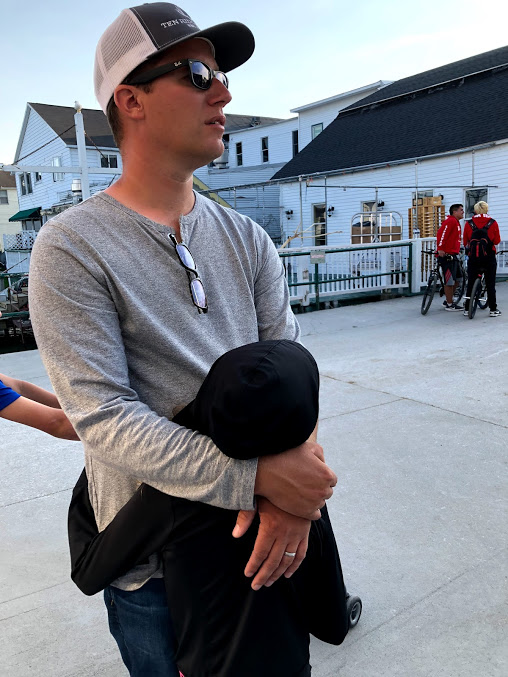 The other day, that daughter who had been lost on the island, was talking about Easter coming up.  She said, “You know why I think people do Easter egg hunts?  I think it’s because we are like the eggs, and Jesus is the one who comes and finds us.”

I had never thought of it like that before, but I love that picture.  It made me think of how Jesus looks for us when we’re lost just like we looked for our daughter, and He rejoices when one is found, just like we rejoiced.

It is interesting to me that the reason our daughter doesn’t like to talk about that day is not because it brings up feelings of fear for her, but because it brings up feelings of guilt and embarrassment.  She thought it was her fault because she turned the wrong way.  And I felt guilty because I’m her mom … how could I let her get out of my sight?  But none of that matters.  She was lost; overwhelmed and unsure, racing and stopping this way and that … then she was found.

We all take wrong turns … we are all lost …

Jesus doesn’t stop looking … He is so anxious to hold you.

“So Jesus told them this parable:  ‘What man of you, having a hundred sheep, if he has lost one of them, does not leave the ninety-nine in the open country, and go after the one that is lost, until he finds it?  And when he has found it, he lays it on his shoulders, rejoicing.  And when he comes home, he calls together his friends and his neighbors, saying to them, ‘Rejoice with me, for I have found my sheep that was lost.’  Just so, I tell you, there will be more joy in heaven over one sinner who repents than over ninety-nine righteous persons who need no repentance.”  Luke 15:3-7

**To read some of our not so traumatic travel experiences, go to Travel Stories; for more about the faith that means so much to us, go to Faith. Thank you for reading!**

Multi City Travel is the Way to Go!

I am a Writer.