Something has been stirring in me for a while now to write about … so, I’m now pretty sure that it has been the Holy Spirit … sorry, Lord, sometimes I’m slow.  It is about my children … our children … as in, the generation we are bringing up right now.

One of the top songs in the United States as well as in the world right now is WAP (It was number 1, and it is still in the top 5 as of this writing).  Have you heard or read the lyrics of this song?  I read the radio edit lyrics and was absolutely shocked, thinking it was the original version.  I couldn’t even imagine it being worse; yet it is far worse, and has somehow continued to top the charts.  If you look at the top 10 songs in the United States, all 10 (as of my writing this) are marked as Explicit.  In fact, there are only 20 songs out of the top 100 that are not Explicit.  And that is just music.

This is also the age where “Cuties” is playing on Netflix, which has been described as nothing short of child pornography.  Human trafficking is on the rise.  A large percentage of young people believe moral truth depends on circumstances and will base their decisions on how they feel (Barna Research Group).  Suicide rates continue to increase, especially in the younger generation.

A recent report from September 2020 from the CDC shows suicides among children and young people aged 10-24 rose 57% from 2007-2018.  Take a second to let that chilling statistic sink in.  Children taking their lives … ages 10, 11, 12 … My kids fall in that age group.  My oldest was born in 2007, which means that since he’s been alive the suicide rate has increased almost 60% for young people.

Children are attached to devices and entertainment media more than ever.  Common Sense Media reported in 2015 that teenagers ages 13-18 use an average of 9 hours of entertainment media per day and 6 hours per day for tweens ages 8-12. This is also the age where children are connected to the “world” in so many ways whether it is social media sites, video games that allow chatting and competing with others online, apps like SnapChat, TikTok, etc that can all be dangerous and harmful, probably in many ways which we don’t even fully realize yet.

Let’s talk more about the internet for a second … I mean, it is everywhere of course.  We don’t function without it anymore. And obviously there are lots of good things about internet access, but in the hands of our children, are we realizing how hard it is to monitor and how dangerous it can be?  Now especially when there is so much more virtual schooling going on, and kids and teens with so much more alone time since COVID and quarantines … it just makes me wonder, what all is happening on our children’s computers? And of course, their phones if they are allowed internet access at their fingertips all the time.

Our family has learned the hard way just how easy an innocent kid can end up seeing things on the internet that will stay in their mind’s eye probably forever.  Even with parental controls and safeguards, it is so hard to protect against everything. I will be the first to admit just how naïve as a parent I have been and how much I have learned since I dived into some research on all of this.

Jesus showed very clearly in His time on the earth how special children are.  When people shushed the kids or ignored them, Jesus took time for them.  He blessed them, and He was quite blunt in his warning about what a big deal it is for causing a child to sin.  That verse from Matthew stopped me in my tracks the other day.

“Whoever receives one such child in my name receives me, but whoever causes one of these little ones who believe in me to sin, it would be better for him to have a great millstone fastened around his neck and to be drowned in the depth of the sea.” Matthew 18:5-6

…the music industry being more and more vulgar

…child predators hunting our kids online (Have you seen this Bark video?  It is so hard to watch, but will blow your mind and break your heart.)

Parents, Believers, Church … are we causing our kids to sin …

…by letting friends or devices take our place

I feel like lately I’ve heard and read Christian voices preface their saying some truth from Scripture by saying something like… “I know it might sound cliché …”,  “not to be cheesy …”, “I don’t want to sound churchy…”  What happened to “I am not ashamed of the gospel, because it is the power of God that brings salvation to everyone who believes.”? (Romans 1:16)  Let’s stop robbing the Word of God of its power.

The devil is prowling around looking for someone to devour (1 Peter 5:8) … that verse is for us, but it is also for our kids.  Will we just ignore the lion? Pretend it isn’t there? Reason to ourselves that the lion must not be that bad of a threat?

Listen, I for sure don’t have all the answers.  This is absolutely not to shame anyone.  I struggle every day as a mom trying to do what is right and to be wise.  I fail at it all the time too.  Here are just a few things I do know:

I know that I have to be as aware as possible of everything my children are seeing.

I know I have to talk to them often about things that I’d rather just … not.

I know I have to teach them God’s Word and to live it the way I teach it.

I know I need help.

I also know that it does not solve anything to allow myself to be filled with worry and fear. Being anxious is not the same thing as being aware and intentional.  I will trust God with my children. They are His, after all.  When I read from Mark chapter 10 that Jesus took the little children in His arms and blessed them, laying His hands on them, I can see my 4 kids gathered around Jesus.  I picture His loving eyes giving them all His attention and His hands holding them close.  I am reminded that He loves them more than I ever can, more than I can even imagine.  So I will trust Him.  But I will also obey Him, listening to His Words and His warnings.

Let us watch out for our children, cry out for them, lift our hands to Him in desperation for them.  Let us not tire in teaching them what is good, pointing them to our Savior and the Word of God, which is living and active, the double-edge sword of defense they so desperately need in this crazy world …so that their roots grow deep as they grow to stand tall and firm…”like a tree planted by streams of water, which yields its fruit in season, and whose leaf does not wither.” Psalm 1:3

“Arise, cry out in the night, at the beginning of the night watches! Pour out your heart like water before the presence of the Lord! Lift your hands to him for the lives of your children.” 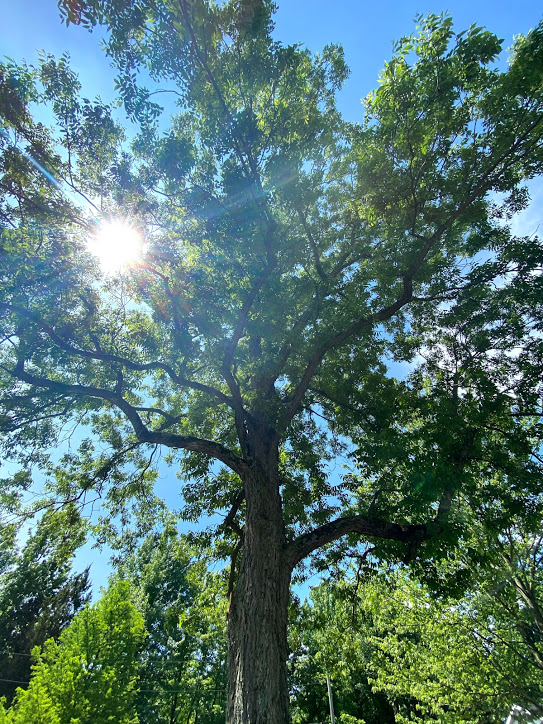 *I’m just starting to write more about matters of faith, but if this is an area of interest for you, here are a couple more posts you may like: A Spiritual Revelation at Perito Moreno Glacier and Yay God Adventures.  Thank you for reading!

You Are Not Alone

God Teaching Me Through Our Kids … Yet Again